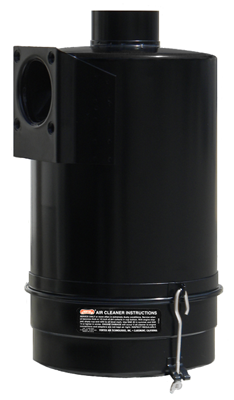 The GA series, similar to the G series in body style, provides a large dust holding capacity and makes intake noise minimal. The GA style is designed for service on engines and compressors where a direct connection can be made with companion flanges. GA air cleaners are suitable for direct vertical mounting. Due to its flanged connection, the cleaner does not require the support of mounting bands or brackets.

The G and GA styles of Oil Bath Air Cleaners are engineered for heavy use of large quantities. They are composed of four elements: the Body Assembly, Prefilter, Disc, and Cup. The Body Assembly houses the Vortox Air Technology filter element, which is made of finely coiled interlocking steel wire and sustains the life of the product. The continuous circulation of oil throughout the cleaner on a controlled basis from low to high air velocity creates a large dust holding capacity. The Prefilter catches chaff and lint before it reaches the main filter and deflects the heavier dirt and oil into the Cup. The Prefilter is also easily removable for quick servicing. The Disc controls the proper measuring and dispersion of oil from the Cup. The Cup serves as an oil and dirt reservoir.